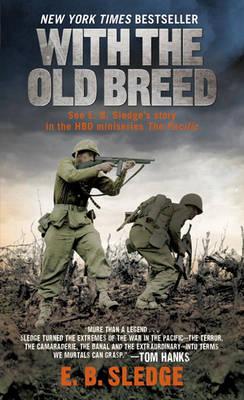 With the Old Breed : At Peleliu and Okinawa PDF Download

2007
5.00 Avg rating—1 Votes
“Eugene Sledge became more than a legend with his memoir, With The Old Breed. He became a chronicler, a historian, a storyteller who turns the extremes of the war in the Pacific—the terror, the camaraderie, the banal and the extraordinary—into terms we mortals can grasp.”—Tom Hanks

In The Wall Street Journal, Victor Davis Hanson named With the Old Breed one of the top five books on epic twentieth-century battles. Studs Terkel interviewed the author for his definitive oral history, The Good War. Now E. B. Sledge’s acclaimed first-person account of fighting at Peleliu and Okinawa returns to thrill, edify, and inspire a new generation.

An Alabama boy steeped in American history and enamored of such heroes as George Washington and Daniel Boone, Eugene B. Sledge became part of the war’s famous 1st Marine Division—3rd Battalion, 5th Marines. Even after intense training, he was shocked to be thrown into the battle of Peleliu, where “the world was a nightmare of flashes, explosions, and snapping bullets.” By the time Sledge hit the hell of Okinawa, he was a combat vet, still filled with fear but no longer with panic.

Based on notes Sledge secretly kept in a copy of the New Testament, With the Old Breed captures with utter simplicity and searing honesty the experience of a soldier in the fierce Pacific Theater. Here is what saved, threatened, and changed his life. Here, too, is the story of how he learned to hate and kill—and came to love—his fellow man.

“In all the literature on the Second World War, there is not a more honest, realistic or moving memoir than Eugene Sledge’s. This is the real deal, the real war: unvarnished, brutal, without a shred of sentimentality or false patriotism, a profound primer on what it actually was like to be in that war. It is a classic that will outlive all the armchair generals’ safe accounts of—not the ‘good war’—but the worst war ever.”—Ken Burns


From the Trade Paperback edition.