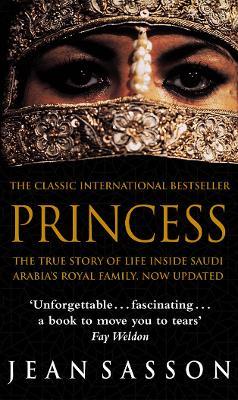 A Saudi woman discusses what life is like for women in her country, describing how women are sold into marriage to men five times their age, are treated as their husbands' slaves, and are often murdered for the slightest transgression.

In a land where Kings still rule, I am a Princess. You must know me only as Sultana, for I cannot reveal my true name for fear that harm will come to me and my family for what I am about to tell you.

Think of a Saudi Arabian princess and what do you see? A woman glittering with jewels, living a life of unbelievable luxury. She has gold, palaces, swimming-pools, servants, designer dresses galore. But in reality she lives in a gilded cage. She has no freedom, no vote, no control over her own life, no value but as a bearer of sons. Hidden behind the veil, she is a prisoner, her jailers her father, her husband, her sons.

'Sultana' is a member of the Saudi royal family, closely related to the King. For the sake of her daughters, she decided that it was time for a woman in her position to speak out about the reality of life for women in her country, whatever their rank. She tells of her own life, from her turbulent childhood to her arranged marriage - a happy one, until her husband decided to take a second wife - and of the lives of her sisters, her friends and her servants. In contrast to the affection and easy camaraderie amongst the women, she relates a history of appalling oppression against them, everyday occurrences that in any other culture would be seen as shocking human rights violations: forced marriages, servants bullied into sex slavery, summary executions.

Princess is a testimony to a woman of indomitable spirit and great courage. By speaking out, 'Sultana' risked bringing the wrath of the Saudi establishment upon her head and upon the heads of her children. For this reason, she told her story anonymously.