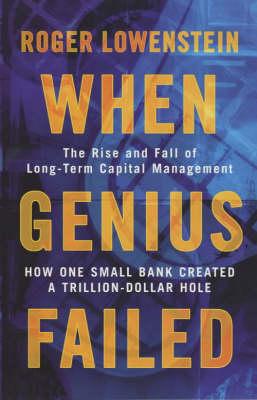 Picking up where Liar's Poker left off (literally, in the bond dealer's desks of Salomon Brothers) the story of Long-Term Capital Management is of a group of elite investors who believed they could beat the market and, like alchemists, create limitless wealth for themselves and their partners.

Founded by John Meriweather, a notoriously confident bond dealer, along with two Nobel prize winners and a floor of Wall Street's brightest and best, Long-Term Captial Management was from the beginning hailed as a new gold standard in investing. It was to be the hedge fund to end all other hedge funds: a discreet private investment club limited to those rich enough to pony up millions.

It became the banks' own favourite fund and from its inception achieved a run of dizzyingly spectacular returns. New investors barged each other aside to get their investment money into LTCM's hands. But as competitors began to mimic Meriweather's fund, he altered strategy to maintain the fund's performance, leveraging capital with credit on a scale not fully understood and never seen before.

When the markets in Indonesia, South America and Russia crashed in 1998 LCTM's investments crashed with them and mountainous debts accumulated. The fund was in melt-down, and threatening to bring down into its trillion-dollar black hole a host of financial instiutions from New York to Switzerland. It's a tale of vivid characters, overwheening ambition, and perilous drama told, in Roger Lowenstein's hands, with brilliant style and panache.