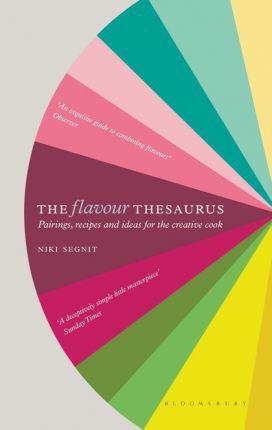 2010
5.00 Avg rating—1 Votes
Niki Segnit was inspired to write The Flavour Thesaurus when she noticed how dependent she was on recipes. As she says- 'Following the instructions in a recipe is like parroting pre-formed sentences from a phrasebook. Forming an understanding of how flavours work together, on the other hand, is like learning the language; it allows you to express yourself freely, to improvise, to find appropriate substitutions for ingredients, to cook a dish the way you fancy cooking it.' What Niki felt she needed was a manual, a primer to help her understand how and why one flavour might go with another, their points in common and their differences - something, in fact, like a thesaurus of flavours. But no such book existed, so she decided to put one together herself.
The result is a compendium of flavour pairings which offers endless diversion and inspiration. In this lively, easy to follow and exceptionally enjoyable book, Niki Segnit takes 99 popular ingredients and explores the ways they might be combined in the kitchen. She has scoured thousands of recipes in countless recipe books, talked to dozens of food technologists and chefs, and eaten in many restaurants - all in her quest for flavour pairings. The book follows the form of Roget's Thesaurus. The back section lists the ingredients alphabetically, and suggests classic and less well known flavour matches for each. The front section contains an entry for every flavour match listed in the back section and is organised into 16 flavour themes such as Bramble + Hedge, Green + Grassy, and Earthy. There are 980 entries in all.
It examines classic pairings such as pork + apple, lamb + apricot, and cucumber + dill; contemporary favourites like chocolate & chilli, lobster + vanilla, and goat's cheese + beetroot; and interesting but unlikely-sounding couples including black pudding + chocolate, lemon + beef, blueberry + mushroom, and watermelon + oyster.
Here are a couple of entries-
Lamb + Mint- The French say bof to the Brits' love of mint with lamb, and they might have a point when it comes to the brutally vinegary strains of mint sauce. In 1747 Hannah Glasse wrote that a roasted, skinned hindquarter of pork will eat like lamb if served with mint sauce, which must have more to do with the overpowering nature of the sauce than any true similarity between the meats. But mint as a partner for lamb should not be dismissed wholesale. Lamb has a natural affinity for herbal flavours and, like citrus, mint's cleansing properties serve the useful purpose of deodorising some of lamb's funkier notes. Consider, for example, the lamb and mint ravioli served at Mario Batali's Babbo restaurant in New York. Or sauce paloise, which is like Bearnaise but swaps the tarragon for mint and is served with roast or grilled lamb. And in Azerbaijan a minted soup called dusbara is served with teeny lamb-filled tortellini bobbing in it. It's most often garnished with soured cream and ga